From unique visitors, to life-saving surgeries and everything in-between- we’ve had a VERY busy few months! We’ve loved welcoming your beloved pets through our surgery doors and giving them plenty of cuddles during their visits. 🥰 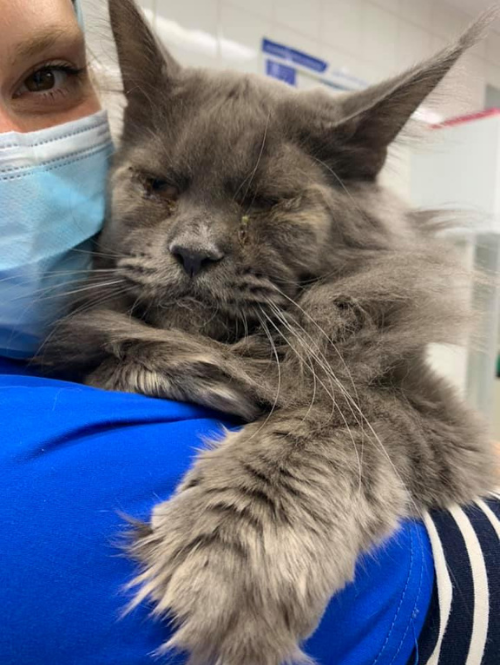 This handsome boy Jasper came into Streatham Hill Vets to have surgery on his eyelids. Jasper was suffering from a condition called Entropion, which is when the eyelids fold inwards, causing the fur to rub against the cornea. As I’m sure you can imagine, this was giving him extreme discomfort! 😿

Entropion can happen in both eyes or just one and can be both top and bottom. However, it’s most commonly the bottom eyelids that turn inwards. In Jasper’s case, both of his bottom eyelids were causing him irritation.

Entropion can lead to several problems if left untreated, such as conjunctivitis, infections, ulcers, blindness and even the loss of an eye. 😿 That’s why it’s always best to discuss with the vet if you have any concerns at all.

Our lovely vet Kate performed his surgery. She cut away a small amount of tissue under the eyelids which prevents them from folding back in.

Entropion surgery can be life-changing for animals in the sense that they will be so much more comfortable and happier. In the pictures below you can see Jasper before (where you can see how much discharge and irritation there is) and after the surgery. 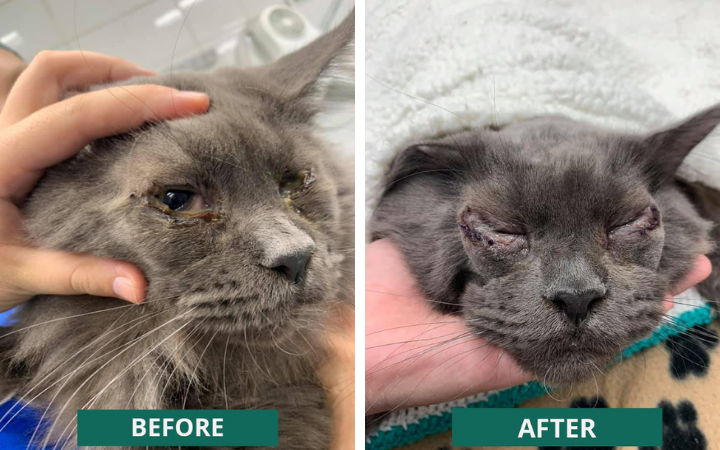 Jasper has since been back to the surgery for his post-op check- and LOTS of cuddles of course! 🥰😻 As you can see (in the picture below) he’s able to open his eyes by himself and is so much more comfortable at home. We love his adorable cone! 💙 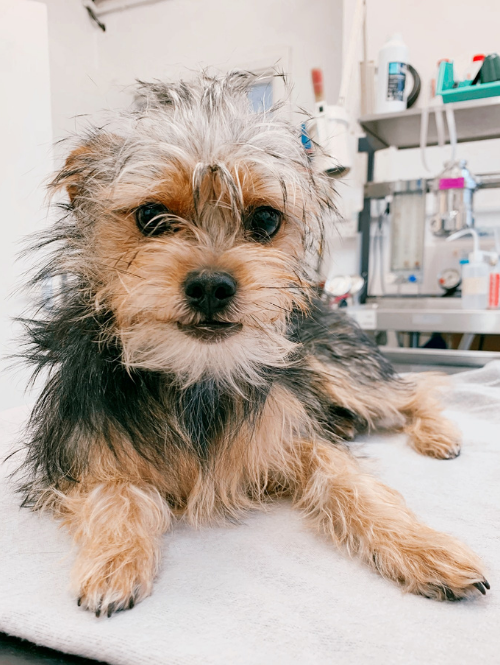 Sxollie is only 8 months old and was rushed to Wimbledon Vets to see our Vet Viraf after she slipped and fell off a little ledge in her garden onto her left side. 🙈😢

After being admitted for x-rays, it was found that she has a small non-displaced fibular fracture. 🦴 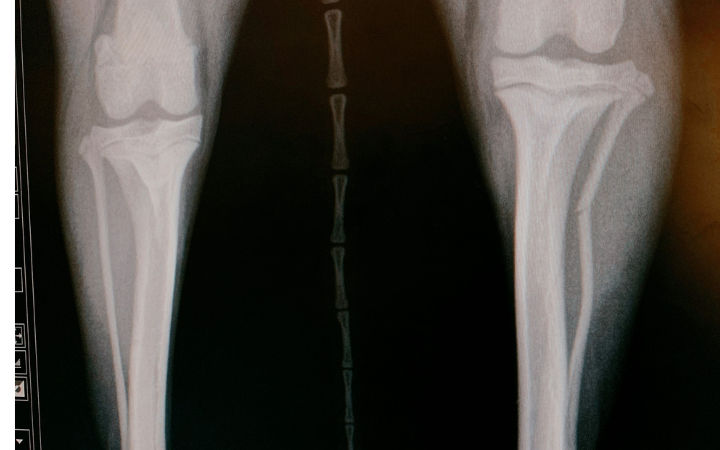 Sxollie went home with some good pain medication and will need to be rested for at least a month so that the bones can heal over.

Over the last few months, we have carried out several neutering procedures at our surgeries. The Corner Vets recently had a visit from a gorgeous kitten called Flossy, who came in to be neutered. 😍

While we were giving her cuddles, we noticed how unique her little paws were! 👀 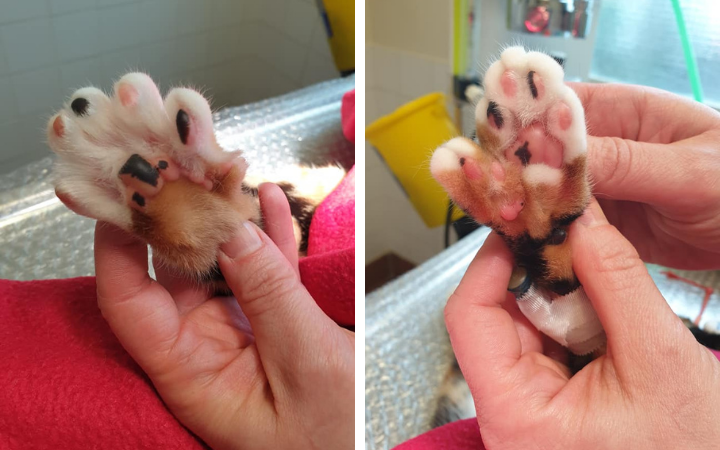 Flossy recovered well from the procedure and is doing great! 💖😊

This is beautiful Gem, an American Bulldog, having a cuddle with our vet Margit at The Animal Clinic. 🥰 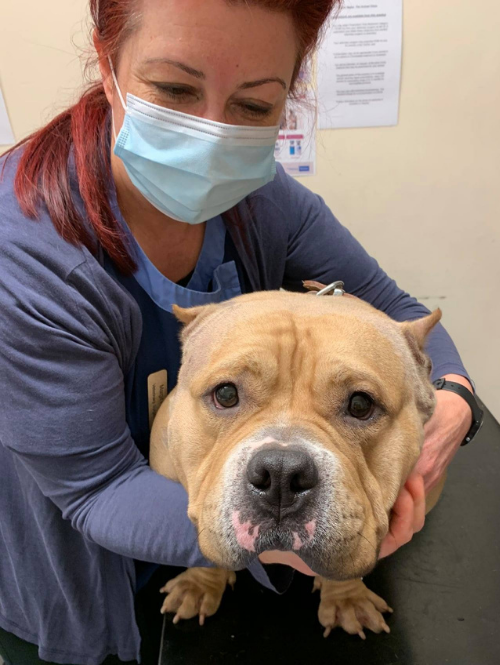 Gem unfortunately sustained some serious injuries from a dog attack recently and had been treated somewhere else before coming to us. As the previously repaired wounds had completely broken down and had become infected to the point where the skin around both of her ears, and on the top of her head had become necrotic (dead tissue), it wasn’t clear if Gem’s face could be restored at all.😢😢

Our very skilled vet Margit spent 5 hours in surgery with Gem to try and salvage as much of the skin as possible and meticulously put it all back together where it belonged. The result is quite amazing, as apart from a few little scars there is really no lasting damage of the horrific injuries to be seen. 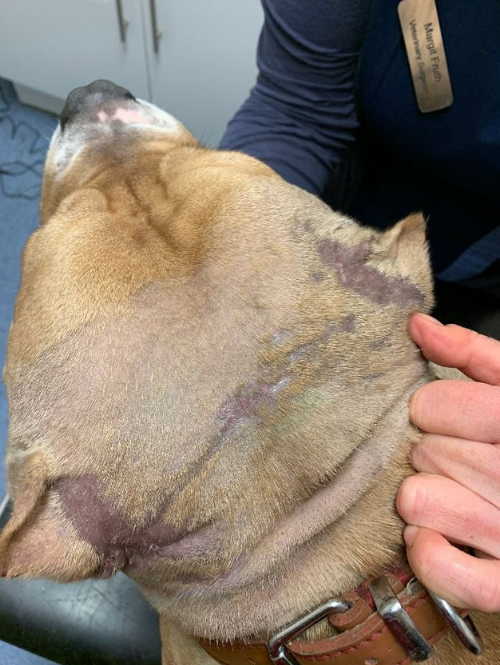 We’ve loved watching Gem on her road to recovery. She has been so brave the whole way through and has been a pleasure to care for. We’re glad to say that she is back to full health now. 😊💗

If you want to see more photos of Gem’s surgery, you can visit The Animal Clinic Facebook page. Please note that the images do show graphic content. 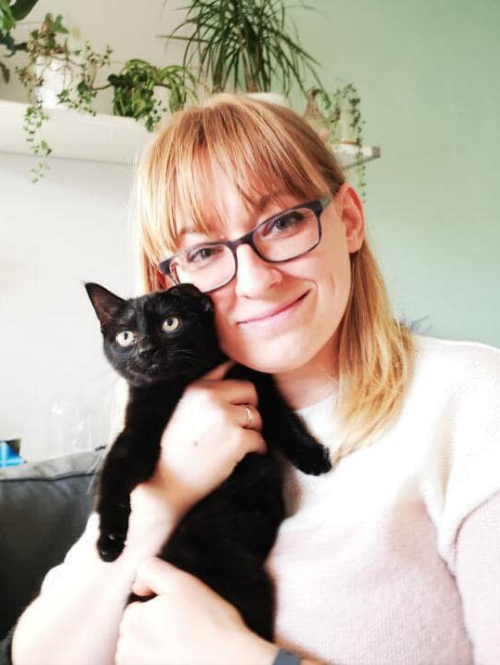 This little stray kitten was found by some members of the public who found her in a park having difficulty walking and in a lot of pain. They kindly brought her to Parish Lane Vets. Sadly both her right and left back legs were badly broken and it was difficult to determine if we would be able to keep function in either of her back legs. 😢

We suspect she was hit by a car to sustain such severe injuries. 💔

After some strong pain relief, she was much happier, so the team decided to give her a chance to heal her breaks. Luckily in small kittens, the ability of the bone to heal is much faster and often more successful than in older cats who break bones.

Both her legs were placed into thick casts to try and stop her from using them, with the aim for the fractures to hopefully heal over 6 weeks. 🤞 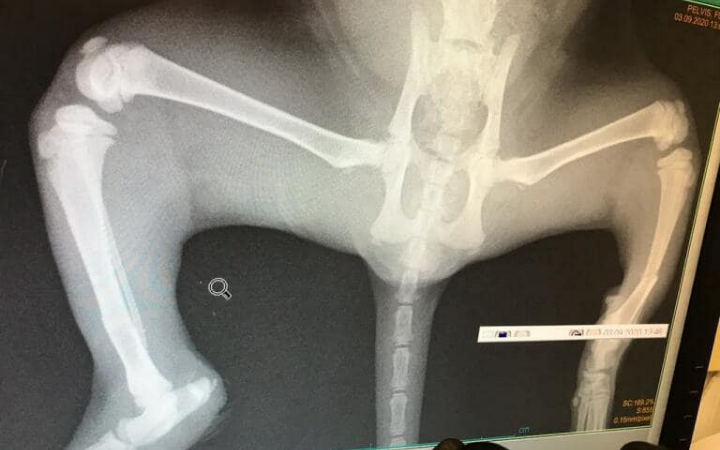 After four weeks, repeat X-Rays were taken which revealed one of her legs was healing well. Sadly the other leg fracture was failing to heal due to it being a more complex break. The tough decision was therefore made to remove the non-healing leg to alleviate any further complications or ongoing pain. 💔 Removal of a limb is often used as a last chance, salvage procedure and it does rely on the remaining legs being well enough to support the body, and so we still had no guarantee that she would be able to walk well on the remaining hind leg.

Thankfully, the surgery went very well and she was up and about in no time. 😊 After only a few days, despite our best efforts to rest her, she was trying to run around and had quickly adapted to life on three legs. 😊🥰

We are pleased to announce that she is now doing extremely well and has found a home with one of our Nurses Kate.💖😻 She is enjoying running around after her other two cats and will hopefully go on to live a normal full life. 💙

This handsome cat is Jub Jub. 💙😻

His owners brought him into Blackheath Vets to see our wonderful vet Dominic, as they were worried that he seemed to have a sore eye. 😿 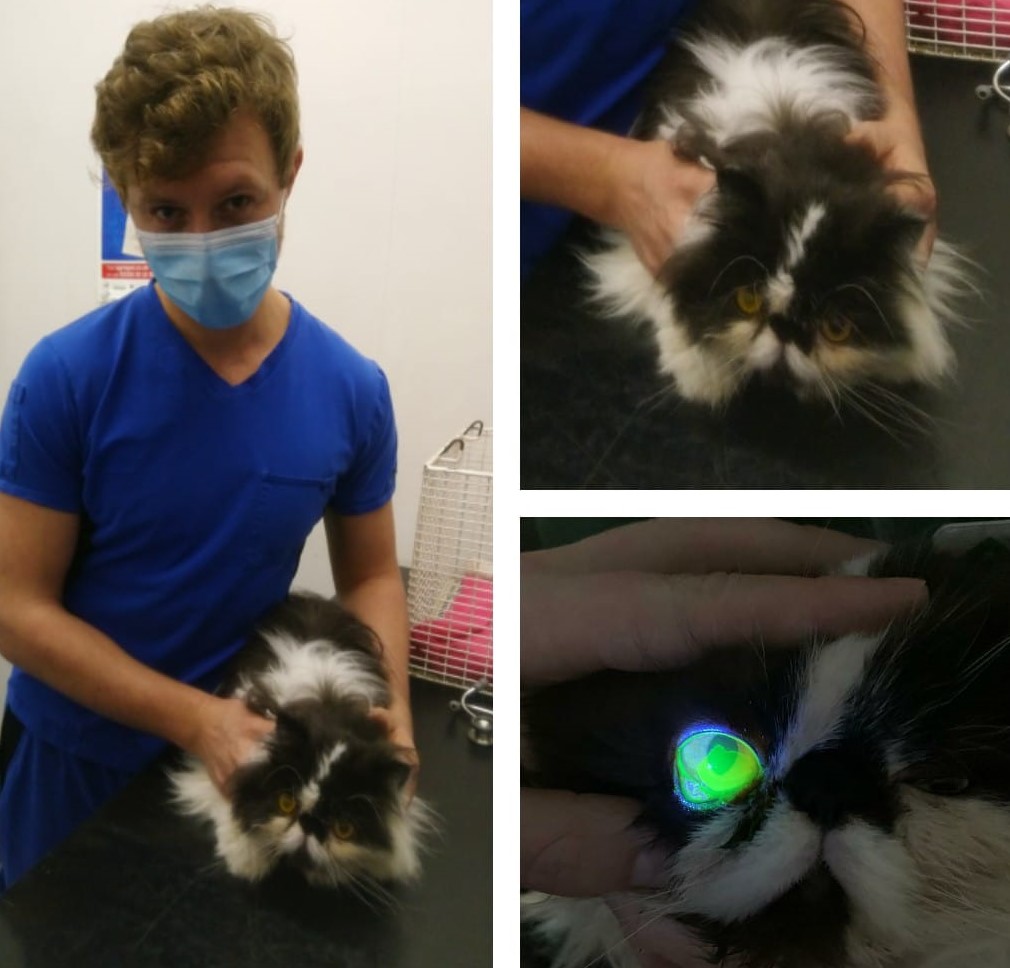 To check for any problems, we put a coloured dye in the eye that stains ulcers green. 🟢 As you can see, little Jub Jub had an eye ulcer. He was sent home with medication and after coming back for a check-up, is now on the mend. 🥰

Croydon Vets had some rather unique visitors recently- a gorgeous group of Geckos. 😁 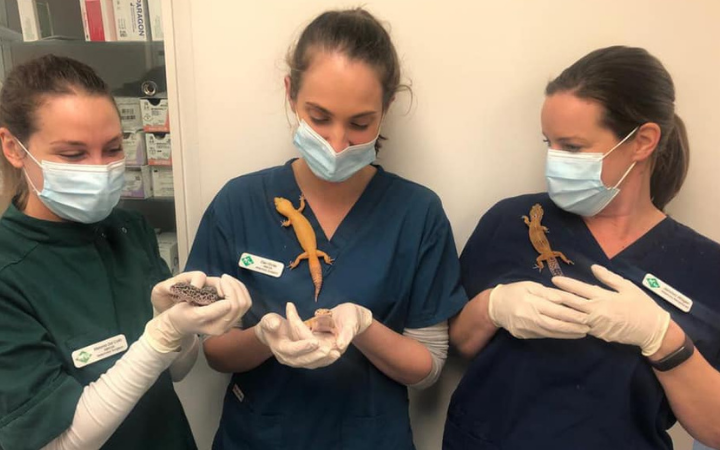 These beautiful creatures are Leopard Geckos, which are from southern India. 🦎

One of them needed worming and the team felt very lucky that their lovely owner brought some of her other Geckos along as a treat. 💚 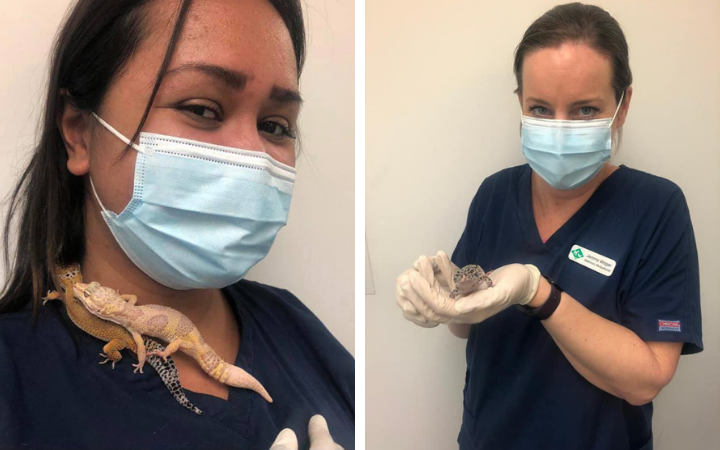 Interesting facts about Geckos 🦎
🔹 They need regular calcium and vitamin D 🌞
🔹They eat a variety of insects, including crickets and roaches 🦗
🔹They prefer dusk and dawn rather than day or night time 🌚
🔹If handled enough they can become very tame and friendly 💚

This is beautiful Jocko! Jocko is a diabetic dog. 🐶 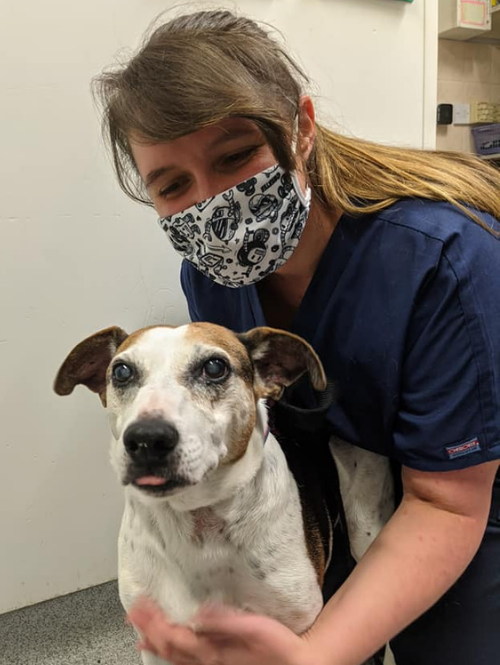 He requires daily injections of insulin at home which his loving mummy has been giving him for quite some time now. 🥰

Jocko recently visited Mayow Vets to conduct a Glucose curve test, as he had been a little under the weather.

This test allowed us to check Jocko’s blood glucose levels throughout the day to ensure his current dose of insulin was effectively controlling his blood glucose.

Jocko is no stranger to needles and was a little ⭐

If you are concerned your pets may have these symptoms please do not hesitate to contact the surgery for further advice.

Gus Got His Appetite Back!

Poor Gus paid a visit to Mitcham Vets with his owner because he wasn’t eating. 🐶 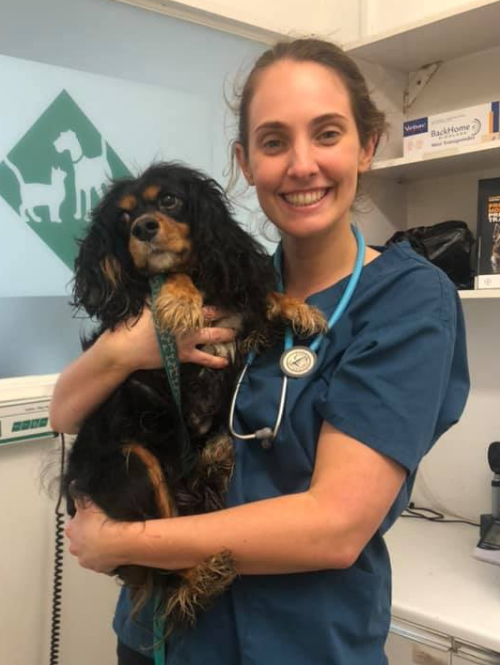 He came in and saw our Vet Ellen who examined him. She found that he had a lump on the outside of his jaw, which after closer inspection turned out to be a piece of bone that had lodged behind his back teeth! 🍗🦴😲 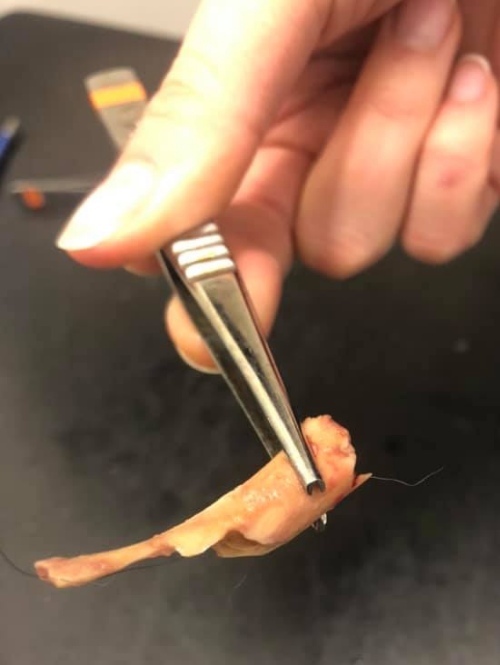 It was quickly removed and he was back to his old self. 😊🥰