Keyhole surgery – Is a Laparoscopic Spay the best way to spay your dog?

Laparoscopic Spay (Neutering) –Is keyhole surgery the best way to spay your dog?

What is keyhole Spaying (Laparoscopic ovariectomy)?

Spaying or neutering is a commonly performed pet surgery involving the removal of the ovaries to prevent unwanted pregnancies. Laparoscopy is the term given to an endoscopic examination of the abdominal cavity (keyhole technique), either for diagnostic or treatment purposes. Using keyhole surgery for neutering usually involves two or three small incisions (cuts) rather than the single large incision associated with conventional surgery.

Whereas conventional surgery can involve removal of the ovaries or of both the ovaries and uterus, the keyhole ovariectomy operation is quicker, less involved, less painful and leaves the uterus in place. Both procedures prevent pregnancy and with no evidence that there is an increased risk leaving an intact uterus.

What is the difference between traditional neutering and keyhole?

Both traditional and keyhole surgeries remove the reproductive organs of the female dog to prevent unwanted puppies, attracting males and stop the heat cycle.

In traditional surgeries, an incision is made in the abdomen and the size of incision varies depending on the size of the dog, it’s weight, condition and the experience of the vet, but can be anywhere between 2 and 4 inches. The ovaries and uterus are then clamped off and suture material ligature is used to close off the blood supply to prevent any bleeding.

Laparoscopic surgery involves one to three small half-inch incisions being made into the body wall that then go into the abdomen. A camera and the instruments are passed through those small incisions and carbon dioxide is then used to inflate the abdomen, helping separate all of the organs to allow visualization and room for the camera. Surgery is performed using a screen and electrocautery seals the blood vessels to prevent bleeding once ovaries are removed.

What are the benefits?

A keyhole spay method is more convenient as compared to a normal procedure because, regardless of the size of the dog, the incision holes are less intrusive leading to less pain and discomfort. With the muscle tissues being cauterized instead of suturing, there is less swelling and blood loss. The dogs come out faster from anesthesia and with reduced scar formation. A keyhole spaying method also has lesser chances of complications and problems associated with wound licking and the chewing of stitches is significantly reduced.

What are the downsides of a laparoscopic spay?

These surgeries are more expensive, partly due to the amount of additional training required and part due to the cost and complexity of the equipment set up.

In the unlikely event of a complication arising, the surgeon may have to revert to traditional methods of open spay and create a larger wound.

Most of these are of lower risk than using traditional spay methods. Bleeding is the most high risk but is still of less risk using keyhole surgery.

Owners should ensure the dog is starved of food from the night before laparoscopic surgery. Water, however, is freely admissible until time of admission at the surgery. Surgery is normally performed in the morning with the animal going home in the afternoon.

When is a good time for neutering?

There is no upper age limit for keyhole spay, but age can be a consideration when choosing which method is best suited to your dog. An older dog is likely to have abnormalities or an existing disease, such as pyometra, in the body of the uterus, therefore leaving the uterus in after surgery is less advisable.

Laparoscopy can also be challenging in small dogs (under 5kg) due to the size of the abdomen. Dogs which are too fat (obese), a pre-surgical weigh loss programme is advised which will reduce surgery risk and is good for longer term health. Overall, keyhole spaying is highly beneficial for medium and large breed dogs and those above the age of 9 months.

What happens after the procedure?

A visit to your vet is generally recommended 2 to 3 days after the procedure in order to check your dog or cat’s progress. Pets are a little quieter than normal for up to 24 hours following the surgery, but should return to normal after this. Food and water can be offered in the evening. Wounds should be checked twice daily and the adhesive dressing removed after 48 hours. The collar should remain on for 10-14 days. If any redness, heat, swelling or discharged is noticed, you should refer to your vet. Metacam and Tramadol painkillers can be administered with food the following day. Your dog should rest for up to two weeks following the procedure.

One of the biggest benefits of the keyhole spay procedure is that the recovery period is almost half compared to normal spaying. As it is less invasive, wounds and skin heal faster and the pet can return quickly to its normal activity routine.

Overall, the benefits of laparoscopy spay is marginally safer than traditional spay in regards to avoiding complications. Not all dogs need to be neutered or spayed nut it can be beneficial to prevent undesirable sexual behaviour or aggressiveness.

Not all male dogs need a neutering procedure, however if they become aggressive, agitated, or show undesirable sexual behaviour, it is a good idea to have them neutered. Neutering does not change their character, but it will help calm them down.

Three of our hospitals in Kent and London can also carry out keyhole surgery which is a non-invasive neutering procedure that reduces the recovery time and post-op pain while keeping the risk of infections at a low rate. Keyhole Spay is a highly skilled procedure that has been used for male and female spay and organ biopsies. If you would like to know a bit more about this cutting-edge technology, please call Streatham Hill Vets, Briar House Vets or Blackheath Vets. 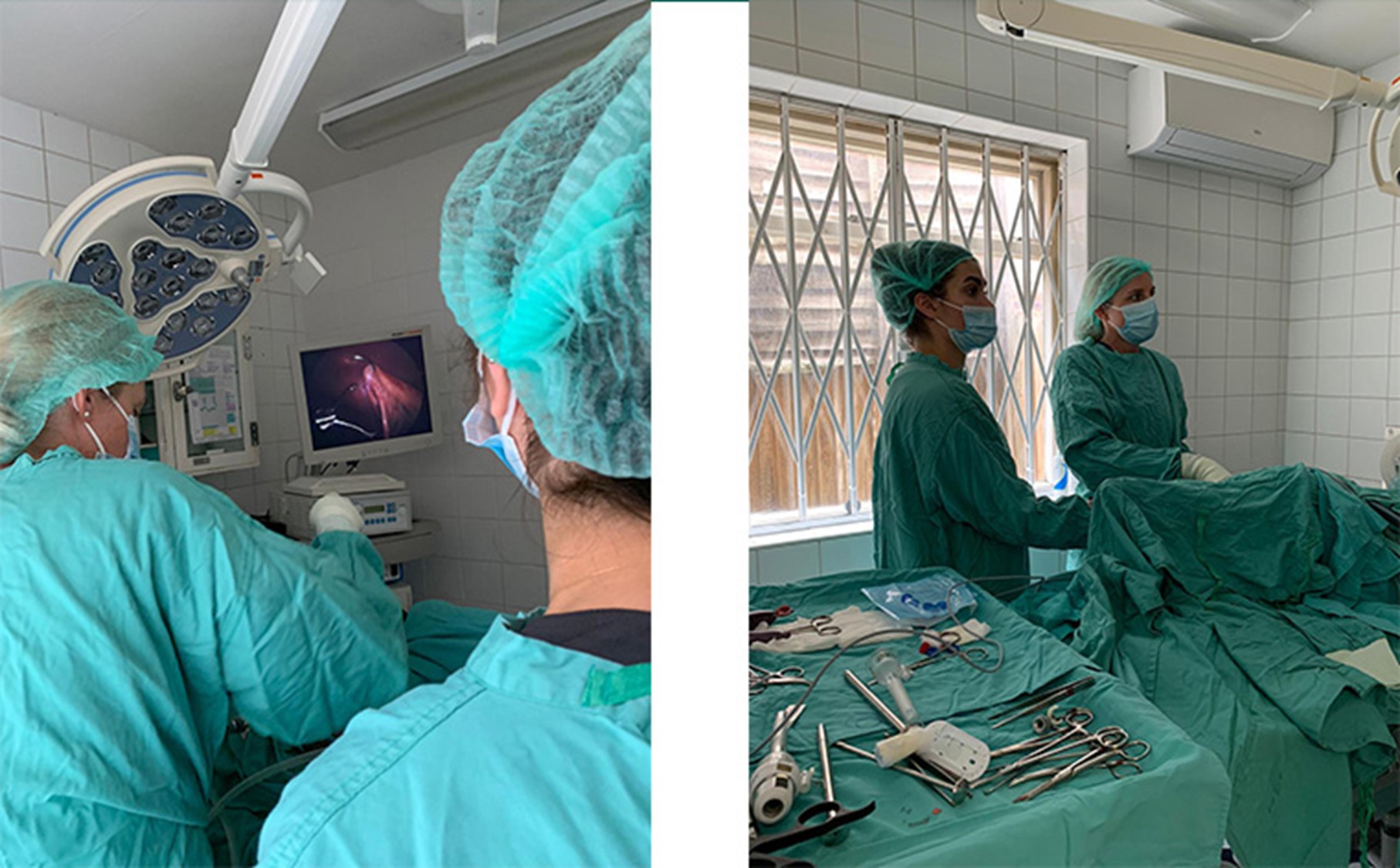